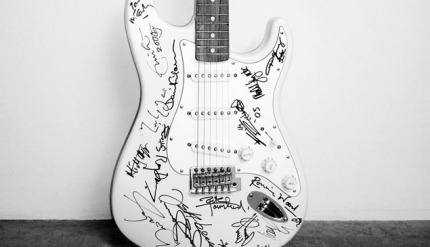 Curiosity in pills – The GUITAR

The guitar is the second most popular musical instrument in the world, after the piano.

The modern classical guitar is the evolution of an instrument called CHAR-TAR (four strings) of which we find traces both in the Babylonian civilization and in the Egyptian graffiti; the guitar as we know it has its origins between the second half of the seventeenth century and the middle of the nineteenth century, thanks to the projects and innovations made in Spain by Antonio de Torres.

Did you know that the most expensive guitar ever sold was Fender’s “Reach Out to Asia” Stratocaster, which raised money for the victims of the 2004 Indian Ocean tsunami and earthquake? It was signed by 19 professional musicians including Eric Clapton, Jimmy Page, Mick Jagger, and David Gilmour and was auctioned for $ 2.7 million.

One last curiosity: the most famous and influential guitarist of all time, Jimi Hendrix, played the guitar with his right-hand upside down and strung backward, because left-handed.

Even if the names of the guitarists we mentioned are only male, I want to mention great female names, which I invite you to listen to, like Sister Rosetta Tharpe who is also called “godmother of rock’n’roll”. She devoted herself to gospel and blues, influencing the likes of Elvis Presley and Johnny Cash; Bonnie Raitt who is instead called the “baroness of the blues”; Joni Mitchell who is defined as the magnificent six-string pioneer par excellence; Nancy Wilson in the 1980s founded the Heart group which entered the Rock and Roll Hall of Fame, a museum located in Cleveland, Ohio, USA. and it is dedicated to the memory of some of the most important personalities who have influenced the music industry.

We cannot all become phenomena like the characters just mentioned, but music has great importance in our lives, apart from transmitting emotions, studying music helps to develop language, speech, memory, attention.

By using this website, you agree to our use of cookies Learn more
Over 1,000 Learners Join Us Monthly!

and achieve their learning goals. With our expert tutors, your goals are closer than ever!